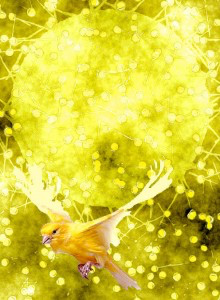 A month later it might have been a tulip poplar leaf in a dying burst of brilliance on the driveway. (Nature’s last green is sometimes gold.) But it was August, so I pointed—“Look, a goldfinch”—even though it looked nothing like one and upon closer inspection certainly wasn’t. But how did a canary end up here, a driveway to a house on a hill in a forest? How long did it think it could avoid the hawks that prowl these woods, this bird, so unwary we could nearly touch it? It was just cautious enough to flitter onward as my stepsons and I neared it with our hands, a rake, a net. It fluttered first into the twisted branches of low-lying shrubs where we could angle our way close, but not quite close enough. Then, when it tired of our attempts, it took wing like a canary in wherever it is canaries come from. Maybe the Canary Islands. An autumn leaf in reverse, it sailed into the bristle brush canopy of oaks and maples populated by blackbirds, finally free.