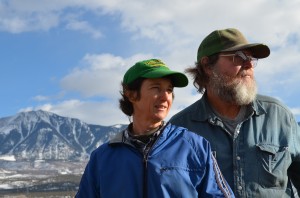 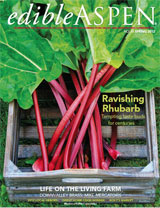 Beneath the visage of Mount Lamborn rising in the distance, Tom and Lynn Gillespie’s farm on the edge of Paonia spreads out in all directions. It’s a 212-acre operation, home to East Frisian sheep, heritage turkeys, chickens, hogs, beef cattle and a lone dairy cow. The Gillespie’s call it the Living Farm, and it’s hard to come up with a more fitting name.

Now in its fourth generation in the Gillespie family, the Living Farm is still alive, and that says a lot, given the challenges historic farms face trying to stay in business and keep their children from heading to the city. And like any living thing, the Gillespie’s farm keeps changing with the times, and that seems to be the secret of its success.

“We love what we do,” Lynn Gillespie says. “We love waking up every day and doing it all over again.”

The operation is as expansive as the farm itself, and it keeps growing. Its community-supported agriculture program supplies produce 50 weeks out of the year to members from Crawford to Carbondale. The farm supplies meat and vegetables to stores and restaurants, including Six89 in Carbondale and Good Health grocery in Glenwood Springs, and breeding stock to farmers around the country. In the summer it’s a farmer’s market, a school for aspiring farmers and a destination for North Fork agri-tourism pilgrims.

Oh, and don’t forget the gardening books Lynn writes or the documentary they produced, Locavore. Or the wool rugs they weave. Or the socks.

And more is on the way.

The Gillespies are planting 300 fruit and nut trees, the latest orchard in a valley famous for its fruit. And they’re hoping to launch a new farm-to-table restaurant in downtown Paonia by summer, putting son Mike, an aspiring chef, to work in the kitchen.

“The thing I like about the restaurant is it completes the circle,” says Lynn Gillespie, sporting a John Deere cap.

Mike, his twin brother Ben, and their sister Jenny, all in their early twenties, are the latest generation on the farm their great-grandparents George and Margaret Gillespie started in 1938. In some ways, it wasn’t so different then from the farm today: a diverse operation back before pesticides and chemical fertilizer took over. Like many Paonia farms, it transformed over the decades into a mostly cattle and hay operation relying on chemicals to grow the crops and kill the weeds.

That changed when Tom and Lynn took over. “My dad, he still shakes his head once in a while,” Tom says, chuckling. “I think we’re surprising him quite a bit, too, because we’re successful.”

Lynn started a greenhouse business on the farm two decades ago so she could work at home and not send the kids off to daycare. When Wal-Mart moved in to nearby Delta and started selling the same flowers and shrubs she was selling, they realized they were headed for trouble. So they changed course, offering local produce to local residents. But those residents were demanding organics, so the Gillespies went chemical-free.

“I had to learn what would make the land happy, the soil happy,” says Tom, with a burly mountain man frame and beard to match. “I gotta have happy microbes to have happy plants. Once you get rid of the fertilizers, you gotta have happy land. It took a few years, but the land healed itself.”

The lessons they learned over the years they now teach to a new generation of farmers, who swap free labor for a free three-year course on organic farming. Most are city kids who aren’t used to muddy work boots.

“I was just working in a brewery in Denver, but I didn’t want to live like a 23-year-old for the rest of my life,” says Benjamin Capron, 28, of Littleton, now in his third year in the program, who hopes to set up his own farm in the San Luis Valley. “I really want to be responsible for raising what sustains me as a person.”

The next generation of Gillespies seems ready to keep the Living Farm alive, Ben and Jenny on the farm side, Mike on the table side. “I’ve never been tempted to leave,” says Ben, who took the money his grandmother gave to send him to college and built a turkey house instead.

Strolling through one of the greenhouses (they’re all heated using nothing but sun and earth), Lynn spots new sprouts of joi choi, Chinese cabbage, popping up. “They just came up today,” she says.

Another season’s produce is on the way, as another generation prepares to keep the Living Farm alive.