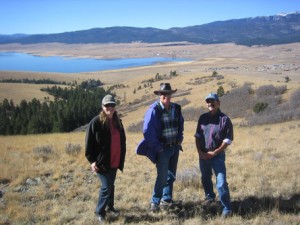 The Barber Farm in Rowan County, N.C., has been handed down in the family from generation to generation since it was settled in 1794. In those two centuries, it’s always been a farm, and even as industrial development spreads across the landscape around it, it always will be a farm.

The family has preserved the 243-acre swath of Piedmont farmland through a land trust, ensuring that the property will be kept free of development. Forever.

“We wanted to save the place,” says Charles Floyd, whose wife Rebecca Barber Floyd and her sister Joyce Ann inherited the farm. “We didn’t want to see it destroyed.”

They are part of a growing movement of landowners who love their land so much they have decided to preserve it through a land trust. Landowners see some tax benefits. In some cases they may qualify for state and federal grants. They may also find some estate-planning benefits. But for most of the people who protect their land in land trusts, the big payoff is knowing that the landscapes they cherish will always stay the way they are.

“Every project we have done has a different motivation,” says Jason Walser, executive director of the Land Trust for Central North Carolina, “but most of the people we work with have the land in their blood. It is part of their identity. The thought of it being turned into a residential community, shopping center or landfill is offensive to them.”

Land trusts seek to protect farmland, ranchland, landmarks and other resources for future generations to enjoy. Owners don’t give up possessing or living on the land, and they don’t lose their rights to sell it or hand it down to future generations. In some cases, they may even hang on to some development rights. But they agree to preserve the land as farmland or wild land and ensure that it stays that way.

“We think it’s the fastest-growing segment of the environmental movement,” says Rob Aldrich, spokesman for the Land Trust Alliance. From 2000 to 2005, the number of land trusts grew 30 percent. The number of conserved acres increased 54 percent to 37 million acres. It’s a race against time. While land trusts add another 1 million or 2 million acres each year, about the same amount is lost to development.

“We feel like there’s only about 20 more years left to really save the land that needs to be saved or else it’s going to be gone,” Aldrich says.

“Open and undeveloped land is important for people’s sense of identity and the unique character of the landscape,” says Ernie Atencio, executive director of the Taos Land Trust in New Mexico.

His organization oversees the conservation easement on the Touch-Me-Not Mountain Preserve, 554 acres next to a state wildlife area, home to herds of elk and deer, plus mountain lions, bears and other species. Another pair of easements protect 475 acres along Black Mesa, an area rich with prehistoric petroglyphs.

“People have a strong sense of landscape here,” Atencio says. “In New Mexico it’s a natural landscape, but it’s just as much a cultural landscape, with centuries, and in some places, thousands of years, of inhabitation.”

Once upon a time, the Barber Farm might have been just one more central North Carolina farm. As neighboring farms disappeared, though, it has become an enduring reminder of the landscape and lifestyle of decades and centuries past.

More than just a conservation easement, the farm has been restored to its glory days. Fifteen buildings are on the property, all of them restored, from the main house to a tenant house, a schoolhouse to a smokehouse. Custom shutters were replaced using Carolina hard pine. Handmade-brick chimneys were restored. Even the original farm terraces remain in place.

The family has listed the farm on the National Register of Historic Places, giving it even more protection. The neighboring farm, also handed down in the Barber family, also has preserved 250 acres, making a 500-acre agricultural preserve.

“When we think of land,” Walser says, “it is so much bigger than just the dirt. It is the context of what the land has meant for the community and what it means for the future.”

The Barber Farm is a legacy not just for the family, Walser says, but for the community.

“Our agricultural heritage is disappearing,” Floyd says. “What we’re preserving is the best of North Carolina Piedmont agriculture.”

The tax benefits help but they’ll never make a landowner as much money as subdividing and selling would. Using a land trust makes sense for people who care not just about the tax breaks but about preserving their piece of landscape, and history, for generations to come.

“I don’t know about other people,” Floyd says, “but we get a lot of satisfaction that this land is going to be protected, that if we could look down from the heavens a hundred years from now it will look the same.”