The elephant’s death was the latest evidence of a growing poaching menace that threatens to erase the gains elephants have made since they were slaughtered by the thousands in Kenya in the 1980s.

“Elephants everywhere are at risk now,” says Josephat Saiko, a member of the anti-poaching team that found this 35-year-old elephant below Mount Kilimanjaro, its head hacked off for its tusks. In the ’80s, worldwide conservation efforts scuttled the ivory trade. Elephants, once on the brink of vanishing from Kenya’s landscapes, resurged. But the ivory trade is back with a vengeance. Poachers have returned to Kenya, and the future for the country’s elephants may be more perilous than ever.

“Elephants are getting killed again,” says Cynthia Moss, whose 40-year-old Amboseli Elephant Research Project is the longest-running study of wild elephants. Based in Kenya’s Amboseli National Park, the organization has identified, named and tracked elephants and created extensive family trees. The elephant named Uhuru, the Swahili word for “freedom,” was one of hundreds of elephants identified by the research group.

When poaching increased in the ’80s, conservationists sounded a global alarm. Illegal hunters had slashed Kenya’s elephant population from 167,000 to just 19,000 to feed a demand for ivory, mostly among Western countries. Activists’ work resulted in a shoot-on-sight policy against poachers in Kenya, a global ban on the ivory trade and an international campaign against buying ivory.

“You really felt like it was a war,” Moss says. “Now it’s all raising its head again.” Recent changes to the ivory ban, known as the Convention on International Trade in Endangered Species (CITES), have allowed southern African nations, where elephants are more abundant, to resume selling ivory. That opens the door for poachers elsewhere in Africa to sell tusks to buyers who keep questions to a minimum. The changes also allow certain countries to buy ivory, including China, where a booming middle class has fostered a seemingly bottomless demand for luxury items like ivory that had long been out of reach.

New rules and new markets have set the stage for an unprecedented raid on elephants. The situation is worst in central Africa, where elephants are killed for meat as well as ivory and governments are less interested in protecting them. Only about 400,000 elephants still roam the continent, less than a third of their numbers in 1979. In 2010, poaching deaths reached their highest numbers in eight years. In Kenya, 2011 proved even worse. Elephant supporters like Moss fear that, with their reduced numbers, elephants won’t be able to rebound the way they did in the past.

Three decades ago, ivory fetched $300 a kilo. Now, the value has tripled. The hunter on the ground might make $2,500 or more from a single big bull elephant. In a country where most people earn less than a dollar a day, Moss says, “that would be several salaries for somebody.”

Josephat Saiko, a member of the anti-poaching team near Mount Kilimanjaro.

But most poachers aren’t locals looking for a windfall. They’re international criminal cartels, well-armed and ready to fight. “It’s ramping up,” Moss says, “and the stakes are getting higher.” Last year two rangers in Kenya’s Tsavo National Park were shot to death by poachers.

Elephant defenders fear the higher bounties will doom the elephants. “The numbers that we’re seeing getting killed now are just way, way higher” than they were in the ’80s, says Richard Bonham, a safari guide turned conservationist who runs Maasailand Preservation Trust and Big Life Foundation, two organizations that put unarmed anti-poaching units on the ground to complement armed government squads. They employ about 230 game scouts, giving jobs to local Maasai, like Saiko, in a region where work is scarce, and setting up health clinics, schools and scholarships so that wildlife can bring benefits to local people who often perceive it as more of a threat. 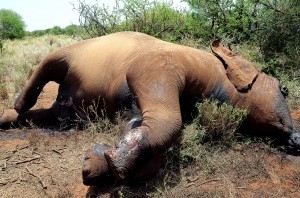 The elephant Uhuru lies on its side where it was found with its head severed outside Amboseli National Park in Kenya. David Frey photo.

When it comes to Uhuru, it’s not clear what motivated his killers. Local youths had severed his tusks and stashed them nearby—a clear sign they intended to sell them. But the job was sloppy, the scouts say, not the work of expert poachers. Rumors hinted a nearby farmer had poisoned Uhuru to protect his crops, pointing to another threat facing elephants. Habitat, too, is disappearing as Kenya’s booming population expands farther and farther into wild country.

Saiko, who has committed himself to preserving wildlife, is caught in the middle. Like growing numbers of modern Maasai, he has broken with traditional herding. He built a home and planted a farm on a piece of land that was recently elephant habitat.