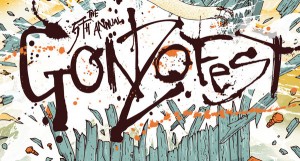 Hunter S. Thompson had become a legend even while he lived, of course. His gonzo journalism blurred fact and fantasy, and his own persona was just as fuzzy. How much reality was in all of those tales laced with mind-altering substances and gunpowder, and how much were they his self-inflicted myth-making? It didn’t seem to matter. Hunter’s “gonzo” image came to embody a lifestyle bigger and more intense than real life could ever embrace.

Yet while he lived, the real man was always there alongside the legend, even if he was holed up from the world in what only he referred to as his “fortified compound.” That September night in 2005, as Hunter’s ashes exploded into the skies over Woody Creek, Colo., it was clear. Thompson the man was gone. He had been ever since he crumbled on the floor at Owl Farm after shooting himself in the head. Thompson the myth lived on.

When I moved to the Aspen, Colo., area in the early ’90s to work as a reporter, I had high hopes of meeting Thompson. Like one more tourist, I would sit at the Woody Creek Tavern, his favorite watering hole a few miles from his Owl Farm, hoping HST might stumble in. Along with so many journalists of my generation, and generations before, and generations after, I considered Dr. Thompson a bookend on my shelf of my journalism icons. Even those of us quite a bit more straight-ahead had to admire his defiance of “greedheads” and his commitment to truth, even when his journalism fell short of factual. Reporters like Ed Bradley, of “60 Minutes,” and Pulitzer-winner David Halberstam counted themselves among Thompson’s coterie.

I never got past one degree of separation to the good doctor. Friends of mine were friends of his. They gambled with him on football games. They edited his work. They revered him.

I was in his presence exactly twice. The first time was at a gallery opening for one of our mutual friends. She was dearly hoping Hunter would arrive, and he did, late, as usual, doddering and mumbling. No one objected when he lit up a cigarette inside the no-smoking building, or when he tottered over to the floor vent and poured off his overflowing glass — Chivas, no doubt. Had I not known, I would have guessed a disoriented homeless man had stumbled in.

The second time I saw Thompson, he was the featured speaker at an anti-war rally I was covering in Aspen. He was late, as usual. His close friend Bob Braudis introduced him. Braudis was the Pitkin County sheriff, a beloved lawman who opposed drug enforcement, a reminder of how much Aspen had changed since the days Hunter ran for sheriff against a man he considered the embodiment of American fear and loathing.

When Thompson took the stage, he was incoherent. It was embarrassing to witness, yet for many in the crowd, being in Hunter’s presence was good enough. Afterward, I caught a glimpse of Thompson past the autograph-seekers, giving an impromptu interview with a local TV station. The space shuttle had exploded over Texas. What were his thoughts?

His assistant-turned-wife Anita encouraged him. You know, the space shuttle. The explosion. The deaths. We talked about this.

Hunter was drawing a blank.

Sometimes you shouldn’t meet your heroes.

Still, when Thompson killed himself, I couldn’t shake a sense of loss. Friends swore the brilliant mind that had penned “Fear and Loathing in Las Vegas” toiled over just the right word at his typewriter to the end.

The day I drove past the creepy metal vultures and the “KEEP OUT” signs and walked through the door of Owl Farm, I was awestruck. Thompson had been dead for a year by then, but his presence still filled the place. Dozens of photos of him hung on the wall, including one over the words “Never call 911. This means you.” When the phone rang, his voice spoke gruffly from the answering machine. His typewriter sat silent in the living room.

“I think he’s always around,” his tearful widow Anita told me.

I had come to interview her about her efforts to launch “The Woody Creeker,” the mountain enclave’s answer to “The New Yorker” in the spirit of her late husband. Among the contributors was George Stranahan, the founder of Flying Dog Brewery, who had been Thompson’s friend and neighbor. Stranahan created the beer in Hunter’s image, with a quote attributed to him and art by his illustrator and sidekick Ralph Steadman.

“For a lot of us, whether we like it or not, we are attached to Hunter’s coattails,” Stranahan told me. “We might as well make them grand coattails.”

I had come to that realization myself half a year earlier drinking Stranahan’s brew in front of the Woody Creek Tavern. It was the night Thompson’s post-mortem wish came true. Johnny Depp, who played Hunter in the “Fear and Loathing in Las Vegas” film, had bankrolled a celebrity-filled bash at Owl Farm. A glowing tower shaped like Hunter’s fist-and-dagger symbol held a mix of fireworks and his cremated remains, ready to blast them into the sky.

The rest of us, some of whom came from across the country, watched from a distant sagebrush-covered ridge as the night sky exploded with colors.

I remember Stranahan moaning that Thompson would have despised the spectacle his death had created. Others, stumbling around drunk and stoned, vowed “Hunter would love this.”

It didn’t matter who was right. As the light from the fireworks dimmed, Hunter S. Thompson was dust drifting in a late-summer sky. Only myth remained.

What was that myth? What did it mean to be gonzo? We could gather at the Woody Creek Tavern, or wherever we happened to be, and figure that out for ourselves.