For Western Colorado County, a Decade of Boom and Bust 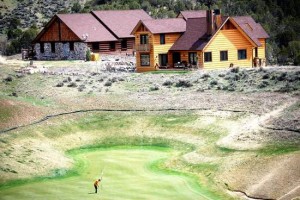 A golfer putts at a hole in Lakota Canyon Ranch, a golf course development that helped redefine New Castle and made it a magnet for people who work upvalley and downvalley. David Frey photo.

In the first decade of the 21st Century, a wave of newcomers filled manufactured houses and million-dollar golf course mansions to make New Castle the fastest-growing town on the Western Slope and put it in the ranks of Colorado’s biggest boomtowns.Garfield County became the state’s fourth fastest-growing county, trailing only the metro suburbs. Neighboring Mesa and Eagle counties followed, ranking fifth and sixth.
But the 2010 census captures a snapshot of a region in transition. After two booming decades, the area from Aspen to Battlement Mesa was staggering under a recession that dealt a blow to the housing industry and drove down fuel prices, cooling the energy industry. Residents moved out. Businesses shuttered. Homes emptied. The numbers tell a story of both growth and flight.Despite the recession, though, forecasters expect the area’s population to climb again.

“We know Garfield County, like several other counties in the state of Colorado, are highly desirable places to live,” said Tamra Allen, long-range planner for Garfield County. “As people continue to age, continue to retire, they’ll move into new homes. I think growth is definitely likely to occur here.” 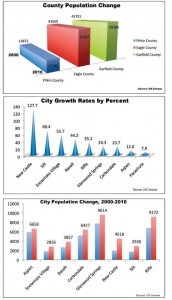 That put Garfield behind only Douglas, Broomfield and Weld counties, all on the Front Range, for its rate of growth, and made it the Western Slope’s fastest-growing county.

Almost every town in the Roaring Fork Valley saw at least double-digit growth in the first decade of the century.

“Folks just want to be in a beautiful area,” said Elizabeth Garner, state demographer with the Colorado Department of Local Affairs.

Is census already a relic?

Already the census figures look like something of a relic, as the recession forced out valley residents who fled in search of jobs elsewhere.

“Those numbers are all BS now,” said Battlement Mesa resident Ron Roesener, who watched the population of his community collapse since the census.

The Garfield County Republican Party chairman, Roesener said he worries about congressional redistricting being done on figures that don’t accurately depict the county.

“There are always business cycles,” Warner said, “but then you need to question, has there been a permanent shift or will it get back on trend?”

The state demographer’s office expects the region’s growth to continue.

Meanwhile, a 2010 socioeconomic study performed for Garfield County by Denver’s BBC Research and Consulting, which takes the recession into account, estimated a more modest but steady growth to 100,000 people. 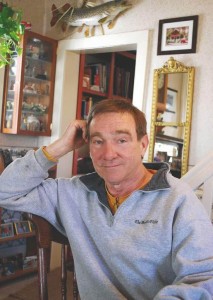 New Castle Mayor Frank Breslin sits in his historic Main Street home. New Castle's population doubled according to the 2010 census, making it one of the fastest-growing towns in Colorado. David Frey photo.

‘Scrambling to keep up’

The biggest change was in New Castle, which grew 127 percent. Its proximity to upvalley jobs and downvalley gas fields made it a destination for both gas workers and Roaring Fork Valley professionals.

The BBC Research and Consulting study found New Castle had the highest average increase in the county since at least 2000.

“During most of that 10-year period, all of our departments were just scrambling to keep up,” said Mayor Frank Breslin.

New Castle was outpaced almost exclusively by Front Range towns that were being swallowed by a booming urban corridor stretching from Fort Collins to Colorado Springs.

Towns up and down the valley also boomed, according to census figures:

A quiet town grows, falters, and begins a recovery

When Breslin first came here from Chicago 35 years ago, New Castle was a town of just 580 people, many of them widows of miners killed in explosions.

Children were so few that grades from kindergarten to 12 went to the same school on Main Street. Students walked past his house every day to have lunch at the community center.

“You think it’s quiet now. It was pretty quiet back then,” he said.

Today, New Castle has more students in its middle school than the entire town population back then. The town is large enough for two elementary schools, a middle school and a shared high school with Silt, plus a brand-new McDonald’s at the entrance to town.

“The growth in construction was mostly driven by speculation in the real estate market that was driven by the oil and gas industry and a confidence in the economy here,” said Breslin, a cabinetmaker serving his second stint as town mayor.

From condos to fancy houses on the Lakota Canyon golf course, homes in New Castle were available and more affordable than elsewhere in the area. In some of the new homes where Breslin installed cabinets, buyers told him they had financed 100 percent of the purchase price.

In 2009, the Town Council asked police to keep an eye on the growing list of foreclosed homes to try to keep them from falling into disrepair and bringing down the appearance of the neighborhoods.

Many homes throughout town still sit empty or for sale, but Breslin said the worst seems to have passed. Judging by his cabinetry business, at least, he said, remodels are starting to make up for the lack of construction.

“People are starting to show a little more confidence that the economy will recover,” he said.