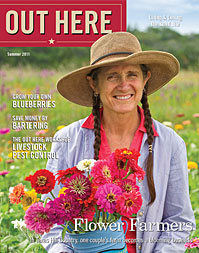 Living on any farm can be lovely, but it’s hard to imagine any farm more beautiful than Pamela and Frank Arnosky’s spread in the midst of Texas Hill Country. At any given time the fields unfolding from their bright blue barn may be filled with golden Texas sunflowers, elegant gladiolas or sparkling anenomies.