Beneath the visage of Mount Lamborn rising in the distance, Tom and Lynn Gillespie’s farm on the edge of Paonia spreads out in all directions. It’s a 212-acre operation, home to East Frisian sheep, heritage turkeys, chickens, hogs, beef cattle and a lone dairy cow. The Gillespie’s call it the Living Farm, and it’s hard to come up with a more fitting name. END_OF_DOCUMENT_TOKEN_TO_BE_REPLACED

In his cowboy hat and blue jeans rolled over muddy boots, Tai Jacober seems more Marlboro Man than green crusader, but he’s a little of both. END_OF_DOCUMENT_TOKEN_TO_BE_REPLACED 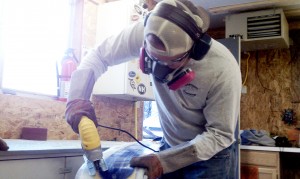 END_OF_DOCUMENT_TOKEN_TO_BE_REPLACED

Steve Borbas sits inside of a small shack at the top of Tenderfoot Mountain, waiting for a radio signal to flip the switch and light up a Christmas tradition that he and other volunteers have prepared for weeks and maintained for decades in Salida, Colo. (pop. 5,236).

On the Friday evening after Thanksgiving Day, a crowd of spectators has gathered below in downtown Salida to watch the city’s annual Christmas parade, capped off with a visit by Santa Claus and the lighting of Tenderfoot Mountain for the holidays.

“Ho ho ho!” Santa belts out before waving his arm to lead the crowd in counting, “One, two, three!”

As if by magic, the mountain suddenly glows with red, orange and white lights outlining a 750-foot-tall Christmas tree above the town. END_OF_DOCUMENT_TOKEN_TO_BE_REPLACED 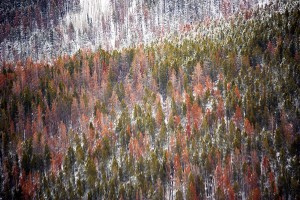 Many trees on the White River National Forest are dying. Bark beetles are killing lodgepole pines. Aspens are experiencing what biologists call sudden aspen decline. So the Forest Service is trying to actively manage for the future forest. It’s part of a national priority called “forest resiliency.” But some critics wonder if humans should be trying to play Mother Nature. END_OF_DOCUMENT_TOKEN_TO_BE_REPLACED

What We Take and Leave When Wildfire Comes

She had three dogs at her feet, and her girlfriend sat beside her on a motel lobby couch. The two cats were at a kennel. Their VW van was full of climbing gear, and their motel room had a couple changes of clothes.

“I’ve been thinking a lot about impermanence,” Ashley Woods told me. END_OF_DOCUMENT_TOKEN_TO_BE_REPLACED