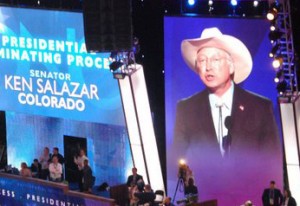 Top Western Democrats took the podium at the Democratic National Convention in Denver on Wednesday, highlighting the region’s resurgence in the party. Few, though, made reference to the region they call home.

The toughest words came from Reid, who lambasted the Bush administration for its energy policies.

“The history of the last hundred years has been a toxic mix of oil and war,” said Reid, who painted energy policy as a matter of national defense.

“If we continue to follow this slippery oil-slicked, downward-winding path,” Reid said, “our citizens will shiver in darkness as our resources hemorrhage to Third World thugs whose only virtue is their control of petroleum-based energy.”

“At best this is an 18th century answer to a 21st century crisis; at worst it’s pure baloney,” he said.

Former Secretary of State Madeleine Albright, who was raised in Denver, praised Obama’s foreign policy plans and his call to withdraw the troops from Iraq.

“For me, this week is a homecoming,” Albright said. “Denver is the city that welcomed my family to the United States after we were driven from our native Czechoslovakia, first by Nazi storm troopers and then by communists. Denver is where I grew up believing in the American Dream and in a country that, more than any other, is associated with truth, justice and freedom.”

Udall, who is running for senator, was one of the few to make note of his Western heritage.

Taking aim at Bush’s economic policies and his opponent Steve Pearce, Udall said, “in the West, we know Washington is broken and Barack Obama is the change we need.” 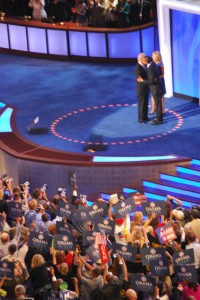 “At the start of this campaign, we had a very simple idea, which was, change in America doesn’t start from the top down. It starts from the bottom up,” said Obama, explaining the decision for the massive rally.

His surprise appearance on stage delighted the crowd at the convention at the Pepsi Center, , where campaign workers hinted at a “big finish” as they handed out campaign signs.

“I thought it was great,” said Denver resident Bill Bush (no relation to the president, he noted), who had a ticket to the night’s events and to Thursday’s events at Mile High. It capped a night of interesting speeches, he said, after two previous nights he described as “mostly boring, with a couple highlights.”

Obama arrived in Denver on Wednesday after a visit to Montana, part of a tour of battleground states. He made a brief appearance on the convention stage after running mate Joe Biden delivered a speech that blasted Republican opponent as “more of the same.”

It was Obama’s second surprise appearance, of sorts, at the convention. On Monday, he appeared on a giant video screen to talk to his wife Michelle and their daughters after her speech.

Obama embraced Biden and he praised the speeches by his wife, former Democratic opponent Hillary Clinton and former president Bill Clinton, who spoke earlier on Wednesday.

“Just in case you were wondering,” Obama said, “I think President Clinton reminded us what it’s like when you have a president who actually puts people first.” 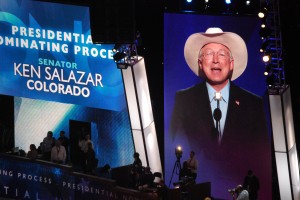 Clinton, who called for unity after a divisive party battle, appeared with the New York delegation and asked that the roll call be halted and that Obama be nominated.

“Let’s declare together in one voice, right here, right now, that Barack Obama is our candidate and he will be our president,” said Clinton, who received a standing ovation as she appeared with the delegation.

Delegates joined in a chorus of Obama’s motto, “Yes we can!” and joined hands in a sign of unity as they sang along to the soul song “Love Train,” symbolically ending a rivalry that dogged the party into the convention.

Obama was nominated by Michael Wilson, an Iraq war veteran and lifelong Republican from Florida. The first of three seconding speeches came from Sen. Ken Salazar, D-Colo., a nod to the host state of the convention, the role of the West in a revived Democratic Party and to Hispanics seen as key to Obama’s success.

“Welcome to Colorado,” Salazar said, wearing his trademark white cowboy had and bolo tie. “Welcome to the West, where we’re building the new Democratic majority.”

Salazar paid tribute to his family’s Hispanic heritage, recognizing five generations of farmers in Colorado’s San Luis Valley and ancestors who founded Santa Fe, N.M., four centuries ago, “before the Pilgrims and the Puritans, before Jamestown and Plymouth.”

“She has stood with hardworking people all of her life and she knows how important it is to keep fighting and keep going,” Huerta said.

Jordan Apollo Pazell, of Copperton, Utah, the third-youngest delegate at the convention, read one of two seconding speeches for Clinton.

The Illinois delegation yielded to New York in deference to Clinton, to allow her to make a final call for unity among the party. 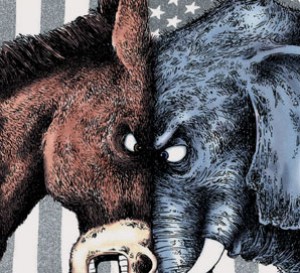 “Colorado is the ‘it’ state,” says James Pindell, managing editor of Politicker.com.

“My advice would be that as Democrats gather at the national convention, they shouldn’t be asking where the best parties are, but where the local phone banks are,” Pindell says. “This is an absolute battleground. If they want to help Barack Obama, they should spend some time on the campaign trail.”

His Pindell Report, a product of the wonky Web site, has upgraded Colorado from “leans Democratic” to a “toss up,” as the state climbed to the No. 3 most-competitive race in the country, up from the No. 5 spot.

The ranking puts Colorado behind Virginia and fellow Western state Nevada, which holds the No. 1 slot. A Nevada poll announced on Friday found Republican John McCain and Democrat Barack Obama in a statistical dead heat. New Mexico holds the No. 5 slot.

The news is the same in Colorado, where polls show the two running neck-and-neck. In June, Obama was leading by five points. A month later, McCain was leading by two. A more recent Rocky Mountain News/CBS4 News poll found McCain leading 44 percent to 41 percent.

The tight race comes despite major Democratic gains in Colorado in recent years. In 2006, Democrats won the governor’s seat, gained seats in the congressional delegation and took majorities in both state houses. Despite a shift to the left in recent years, Pindell says, “there’s no doubt that Colorado has become more competitive in the last month and a half.”

The intense battle has had both Obama and McCain’s camps devoting ample airtime to win over Colorado voters. McCain has made two trips to the state within a month, mostly for low-key fund-raisers among supporters, and to meet and pose for pictures with the visiting Dalai Lama. His latest stop included time to shoot a campaign ad outside Aspen.

His campaign has recently fired off ads aimed at Hispanics in Colorado, New Mexico and Nevada. Obama’s campaign this week criticized McCain’s tax plan in an ad targeted to Colorado and seven other battleground states. The American Leadership Project, a pro-Hillary Clinton group, is launching Colorado ads during the convention attacking McCain for his energy policies.

Recent polls show those two running neck-and-neck, too, with Schaeffer erasing a strong early lead by Udall. Pindell lists that race as the No. 2 Senate race in the country, behind the battle for the seat held by Sen. John Sununu, R-N.H.

As Democrats prepare to converge in Denver, Obama supporters remain upbeat about his chances, not only in Colorado but across the region. In recent days, Centennial State Democrats have been jumping over McCain’s suggestion that the Colorado River Compact, which divvies up water between Western states, ought to be renegotiated. It’s an idea that doesn’t play well in Colorado, which fears it will lose more water to booming downstream desert states.

“I think the opportunities for Barack Obama in the mountain West are enormous and it’s likely to make the difference for him,” says Carl Pope, president of the Sierra Club, which has endorsed Obama. “You start adding up Colorado, New Mexico and Nevada as the most doable. That makes a big difference.”