The Surprising Face of Cashmere 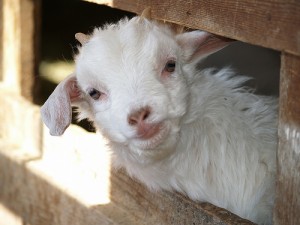 Norma Bromley has lots of friends with cashmere sweaters. Their names are Northrop, Nike and Nancy, Ranger, Ruby and Raven, Zephyr, Zenith, Zeta and Zeb, just to name a few.

“Most people are amazed,” says Bromley, a longtime hand spinner who started raising goats to keep her in a steady supply of cashmere. “They don’t associate goats and cashmere together. They think of Billy goats and tin cans, I guess.”

Bromley thinks of them as pets and luxurious fiber. She has 25 cashmere goats at her Boreas Farm in Newark, Vt., and she knows them all by name, and by personality. For her, they are a source of constant amusement, occasional frustration and a regular supply of one of the softest, warmest most sought-after materials around.

“After you spin cashmere – or wear cashmere – you’re like, wow! This is the best,” she says. “Next to your skin it’s just so comfortable and warm.”

What makes it so warm and soft is the tiny size of the fiber. True cashmere is just 18 microns in diameter – that’s 18 millionths of a meter wide, smaller even than their cousin the Angora goat, which produces mohair. The fiber is shorter than, say, wool, and it doesn’t have the little scales on it that can make wool so itchy. Cashmere is six times warmer by weight than wool, too.

It’s also quite a bit pricier. Goats just don’t put out much cashmere, Bromley says. Unlike their friends the sheep, which fluff up like big pillows and produce enough wool to shear off in giant bundles, goats are stingier with their cashmere. It grows as an undercoat for the goat. Take Bromley’s goats for instance. All 25 of them are black, but their cashmere ranges from silver to tan to brown.

Instead of being sheared off with big clippers like wool, cashmere has to be meticulously combed off when it’s shedding time in late winter. Bromley says each goat takes her about three 30-minute combings. Then she picks out the guard hairs that are caught in the mix. Then she takes them to a mill to spin out the rest of the guard hairs.

In the end, each goat produces about four ounces of cashmere a year, she says. That’s about enough to knit four scarves each.

“There isn’t enough to go around to make everybody happy,” she says.

For Bromley, though it’s not about the money. She sells the fiber her goats produce, but it’s always at a loss, she says. For her, the goats are a hobby, and a way to spend time with animals she has come to love. It’s a labor of love, and, she jokes, “of my husband’s patience.”

Bromley got her first goats in 2007. She wanted a few animals to keep her busy after she and her husband retired from the corporate world in Connecticut. They bought a farm about a half-hour from the Canadian border.

“I thought I would just get a few goats,” she says. “I now have 25 and I’m holding steady at that. That’s plenty. I don’t go large because my animals are very social and I like to know each one. They’re all pets.”

Cashmere goats aren’t a specific breed, but they are the product of breeding. The goats are carefully chosen to produce a fine, soft undercoat. It’s a tradition that stretches back hundreds of years in central Asia (think Kashmir) where goats were long prized for producing soft, light garments ideal for the region’s cold winters.

Some credit Napoleon for introducing cashmere to the West when he brought back a ring shawl – a cashmere garment so fine it could be pulled through a wedding ring – for Josephine.

They may have long hair or short hair, and their coats come in a wide range of colors that have nothing to do with the cashmere beneath. Most still retain hints of their semi-wild ancestry, too. They tend to have wide horns and sturdy builds. They’re wary and sly.

“They’re fun animals, and friendly and hearty,” Bromley says. “The first thing I learned is they’re much smarter than me. I laugh a lot, because they just have outsmarted me every which way.”

Most cashmere still comes from Asia, particularly China. Cashmere farms are still unusual in the United States, where it only started to take root in the 1980s.

That makes Bromley a bit unusual, and she finds herself doing a lot of explaining. No, cashmere doesn’t come from rabbits, llamas or sheep. It comes from wily goats, like Chico and Cappie, Ruby, Rosie and Zora – animals that don’t mind the Vermont winters and peel the bark off of Christmas trees and eat it like spaghetti.

Bromley loves the cashmere, but it’s the goats she’s become smitten with. “They have so much personality and they’re so smart,” she says. “Can you tell I like them?”