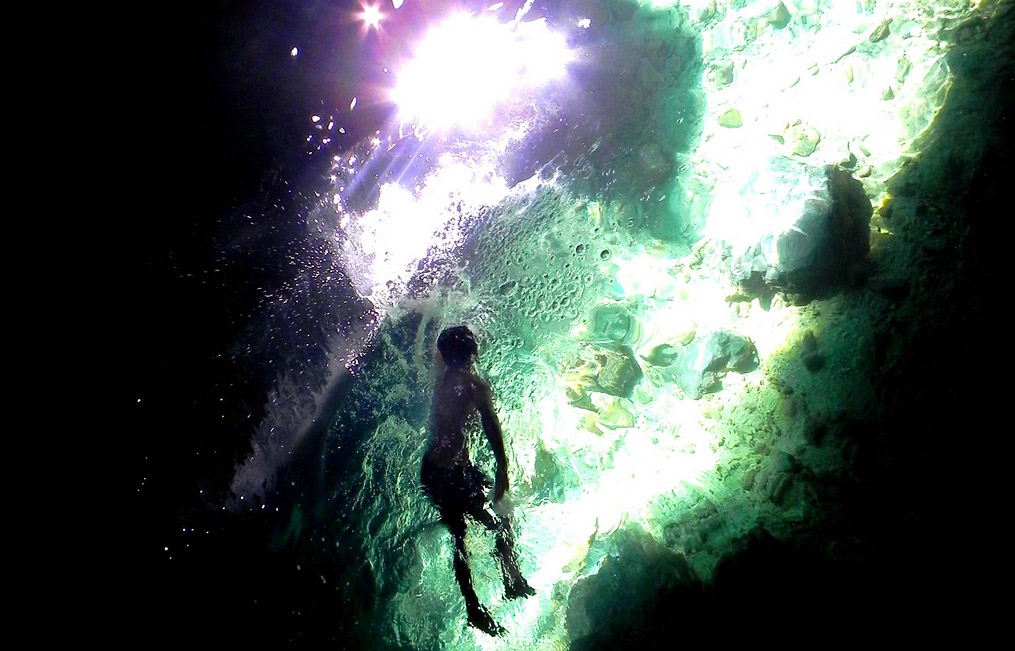 I am that fool.

I came with my twin 12-year-old stepsons and their cousins, boys 8 and 15. My wife’s family is Mexican, and before the twins moved to the United States, the cousins had lived just blocks away in the town of Cuernavaca. They’re close in age, allied in spirit, and before life turned to iPods and Xboxes, they entertained themselves by pelting guavas at one another from their grandfather’s roof.

After spending half their lives north of the border, the twins were back in Mexico for the first time, so my wife and I made a family occasion of it. We set off with the four boys and my father-in-law to the Riviera Maya to do the sorts of things tourists do, at least the ones who come with grandfathers and eight-year-olds. We swam, played in the sand and explored Mayan pyramids. The kids exchanged dirty Spanish words for dirty English words.

While my wife and her father worked out some family business, the boys and I went cenote-bound. I picked one my wife and I had been to a few years before: safe for kids, with just one spot I remembered as tight and creepy, where the walls closed in before opening into a beautiful chamber. This cenote also had two “eyes” where the caverns opened to the sky, connected by an underwater corridor for scuba divers and a footpath for snorkelers.

We hired a guide, a slight young Mayan woman with the un-Mayan name of Wendy, who spoke less English than I spoke Spanish. She outfitted us in short-sleeve wetsuits, snorkels, masks, fins and underwater lanterns we strapped to our wrists. We would need those, she told us, to light our way.

I mostly worried about the 8-year-old, but he had the courage of a younger brother forced to keep up with older kids and the body of a flotation device: short, round and virtually unsinkable. There wasn’t much to worry about. Wendy would lead us. An underwater cord would mark the way.

“Don’t leave the cord,” she told us in Spanish.

We waded into the first pool, unexpectedly cool in the tropical heat, unbelievably blue in the green jungle. The youngest swam like a seal. I brought up the rear like a border collie. Occasionally we stopped as Wendy waved her lantern and explained the cave formations. I missed the first part of these explanations while my face was underwater and the second part when the Spanish went over my head. I heard something like:

Wendy led us on again and stopped.

She gestured to the cave wall with her lantern, illuminating a narrow opening that led into darkness. “There,” She said in Spanish. “There. There,” I remembered the skinny corridor from the last trip. A few seconds and it opened up. Still, it looked tricky in there. Was this where she wanted us to go?

I saw no cord to follow and Wendy didn’t seem inclined to go first, but she seemed very insistent. “There. There. There.”

I looked at her, at the hole and back at her again. She looked at me, flashing her lantern at the opening.

I slipped in my snorkel and plunged ahead, following the light into the tunnel. The limestone ceiling sloped down, down, until it plunged beneath the surface. I didn’t remember that from before.

I was nearly out of breath when I surfaced in a tiny dome, just high enough for my head to emerge. The snorkel scraped the ragged ceiling. My breath echoed off the walls. The sounds of splashing bounced and magnified.

I turned. Nobody followed. I waited. Nobody shouted. What had I done?

All I had to do was turn and go back, but my breathing had gone short and shallow. As I struggled to keep my face above the surface, my snorkel filled with water. I treaded water, trying to slow my breath, collect my senses.

Drawing the deepest breath I could, I plunged back to where I thought I had come from. Limestone fins glowed before me with lantern light. I was relieved. Someone on the other side was looking for me.

But the light I was chasing was my own. Like a lost hiker following his own footprints, I was leading myself deeper and deeper into trouble. My hopes deflated. I deflated. My air was running out.

Then I saw lanterns bouncing in the distance. I swam toward them, but as their forms emerged, I saw they were scuba divers, unaware of my presence. I had come to a place where only scuba divers could pass and my lungs were emptying.

Adventurers, I had heard, talk of a formula of threes. A person can live three weeks without food, three days without water, three minutes without air. My clock was ticking.

The part of my brain dedicated to self-preservation did the only thing it could think to do in this situation. It freaked out. I flailed with abandon, paddling desperately to get my face above a surface that didn’t exist. My head pounded the ceiling.

Meanwhile, the intellectual part of my brain was relaxed, serene, and severely unhelpful. It was as if one hemisphere wanted to break off a stalactite and smash a hole in the ceiling as the other resigned itself to the infinite beyond. It knew this moment would someday come. The last page of a novel. The cover about to snap shut.

Then it opened wide.

I was at the surface again, gasping. A man’s face hovered in front of me, a guardian angel in scuba gear. One of those divers must have spotted me and pulled me backward to the hollow. He held a breathing tube to my face.

“This is oxygen,” he said, as if he knew the only words I needed to hear. Divers carry a spare tube for just this sort of idiocy. He placed it in my mouth and I heard my panicked breathing.

“Relax,” he said. He spoke with a French accent, making this Mexican moment all the more surreal.

In seconds, he led me back into the chamber where I had left the boys. I brought my head to the surface, removed the tube and took a deep breath. The diver disappeared without an au revoir.

In the half-light, the boys’ bodies sparkled like crystal in the waist-deep water. I must have looked similar, and for a moment, I saw what precious lives they were to me, and what a loss my death would have been to them. The worry on their faces melted.

“You almost died,” one of my boys said, shaking his head like a disappointed father.

Wendy’s “There. There. There,” she explained, was pointing out the route to the other eye, the one penetrable only by divers. What she was really saying was “Don’t go there. There. There.” That subtle nuance was lost to me.

Shaky, and shaken, I breathed. Again. Again. The tension passed. Thoughts of life, death and whatever might come after dissolved into giggles and small talk. Kids rarely pause to contemplate the mortal coil.

I was still unsteady as we walked along the rocky ground to the other pool. Wendy pointed her lantern to a tunnel: the opposite end of the one I had swum into. If I had a scuba tank for lungs, I would have emerged here, in the sunlight of another eye.

The boys leapt in and dove to the bottom. I floated, listening to the sound of my breath. Then, filling my lungs, I plunged down with them, as deep as I could go until the water lifted me up.
“How did the air taste?” one of the twins asked over the din of the car radio as we drove back. I was taken aback. Then I realized, he was wondering what an oxygen tank tasted like.

The conversation turned before I could answer. The air from the tank didn’t taste like anything, I wanted to say. But when my face came to the surface and I could breathe on my own, air was a delicacy.