On the 300-acre spread his mother named Tranquility Farm, he raises grass-fed Angus beef, a few sheep, a couple chickens—and about a million oysters.

“Oysters are back,” says Petty, tall and thin in his Patagonia jeans, with a boyish smile and a thinning hairline. “They’re local. They’re natural. They taste good. They help the bay.”

Petty is chief executive of a five-person operation dubbed the Hollywood Oyster Co., set in a conservation easement along with the farm. The company is part of a resurgence of the state oyster industry. Last year, Maryland oystermen brought in their biggest haul of wild oysters since disease nearly wiped out the Chesapeake oyster in the 1980s. Joining their ranks is a growing number of oyster farmers like Petty, who are raising high-quality Maryland half-shell oysters for raw bars throughout the area.

At 54, Petty is an unlikely oysterman, and just as unlikely a farmer. The son of a Manhattan banker, he spends most of his time as an underwriter for Federal National Commercial Credit, the Bethesda company he helped found 20 years ago. But weekends are another matter. Thanks to his father, who clung to the farm life of an Illinois boyhood, Petty was raised a city kid during the week and a farm boy on weekends. That upbringing instilled in him a love of the country life, one he has tried to nurture in the four children he and his wife, Elizabeth, have raised.

“He felt it was very important to raise his family knowing both the city and the country,” Petty says of his dad. “That’s why I’m schizophrenic.”

In 1966, his father became an assistant treasury secretary under President Lyndon Johnson and the family moved to Washington, D.C. That’s when they bought a piece of the old Sotterley Plantation, which remains a historic site next to the farm. They made the property their country escape. Petty, his sister and two brothers grew up disking and plowing the fields and sleeping in a cabin in the woods. His family was so busy with the farm, they barely paid attention to the river that rolls past it.

The Pettys still raise a half-dozen lambs and about 30 cows—enough to keep it a working farm but not enough to make much money. A numbers guy, Petty figured that for the farm to pay its way, the family ought to subdivide it and sell off the pieces or plunge into those long-overlooked waters of the Patuxent River and join Maryland’s fledgling oyster farming industry.

Four centuries ago, when Capt. John Smith sailed the Chesapeake, the underwater banks were so thick with oysters that their knobby shells caused shipwrecks. Ever since, watermen have plied the shallows to pluck oysters, once as synonymous with Maryland cuisine as crabs are today. Overharvesting, pollution and disease eventually decimated the watershed’s oyster population. So in 2004, the state began setting up sanctuaries in an effort to restore the mollusk, barring watermen from the banks they once worked.

Since then, a small but growing number of farms like Petty’s have been returning oysters in captivity to the traditional waterways and transforming the way people eat them. They grow triploids, specially bred oysters that resist disease, don’t spawn and reach appetizer size in less than a year.

Natural oysters—diploids—take up to three years to mature, and spawn in the summer. Spawning makes the meat tough, the juices cloudy and the creatures more disease-prone (thus the “only in an ‘R’ month” dictum that has long prevented oyster lovers from indulging during warmer months). Triploids—the mules of the shellfish world—don’t reproduce, so they’re raw-bar friendly even in the heat of summer.

“It has really helped the expansion of the half-shell market and white tablecloth market,” says Steve Vilnit, fisheries marketing director for the state Department of Natural Resources. “The old wives’ tale of months that end in ‘R,’ it blows that out the window and allows restaurants to have a high-quality oyster year-round.”

These farm-raised oysters also provide many of the environmental benefits of their wild cousins. Although they’re in underwater cages, farm-raised oysters create their own reefs and filter pollutants. A single oyster can filter about 50 gallons of water a day. Petty says he can see the difference from the banks of Tranquility Farm.

Petty had raised oysters as a hobby for about eight years, taking advantage of a little-known Maryland tax credit and inventing an excuse to drink cocktails on the dock with friends, who jokingly called themselves the “Oyster Grower Watcher Association.” They’d bring their own oyster cages, stock them, drop them off Petty’s dock and let them grow. By fall, they’d have 5,000 to 10,000 oysters to shuck and suck down raw at an end-of-season fête. But Petty saw the potential for more than a hobby. Oyster farming won’t make him rich, he says, but “the margins are there. On the back of an envelope, the numbers work.” 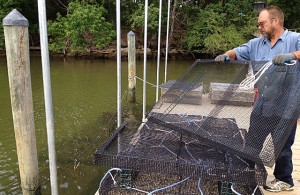 A system of crates, called “upwellers,” stretches along his dock to raise tiny seed oysters in buckets out of the river. When they’re big enough to leave the upwellers, the mollusks find a home in the shadows on the bottom of the Patuxent, where 500 cages are strung, each the size of an open suitcase and holding 1,400 oysters.

As the oysters grow over the months from the size of a dime to a half dollar, a two-person team routinely pours them onto a conveyor belt and runs them through a motorized tumbler that breaks off the barnacles, shapes the shells, sorts them by size and, hopefully, creates the plate appeal chefs seek on the half shell.

Harvesting can mean scooping anywhere from 2,000 to 20,000 oysters from their cages, depending on customer orders, sometimes two or three times a week, year-round. They’re packed cup side down in 100-count boxes, refrigerated overnight and delivered in the morning.

Last fall, Hollywood Oyster Co. obtained its state permit and Petty started making the rounds of seafood restaurants, where he found chefs eager for hard-to-find Maryland half-shell oysters. He sells his crop to wholesalers who supply restaurants across the state, from Bethesda’s Food Wine & Co. to Baltimore’s Ryleigh’s Oyster.

If wine-making relies on terroir, the mystical alchemy of soil and climate, oyster harvesting depends on its aquatic equivalent. The Patuxent’s brackish waters have enough salt to support oysters, but without overwhelming their flavor.

“I was a little shocked to see how good they were,” says Patrick Morrow, a chef at Ryleigh’s Oyster. “It’s not the salt-bomb, super-salty oyster, so you’re getting more of a sweet finish to them, which is a great thing.”

Just a few years ago, Maryland half-shell oysters were almost nonexistent. Most of the state’s homegrown oysters were wild, bound for cans, jars and tins. Wild oysters just aren’t plump or pretty enough for finicky half-shell diners. Raw bars brought in oysters from Virginia to Prince Edward Island but skipped past Maryland. Now, of the dozen oysters offered at Ryleigh’s on any given day, Morrow says, usually one will be from home waters.

“Maryland was a big oyster industry for so long, and it disappeared,” he says. “It’s kind of nice to see it come back, and it’s coming back quickly.”

Farm-raised Maryland oysters still represent a small fraction of the market. Before last year, only one oyster aquaculture outfit was licensed in the state. There are more than a dozen now, but the oyster harvest is still lagging. Last year, oystermen in Virginia, which has been promoting aquaculture for more than a decade, brought in three times the haul of their Maryland neighbors, and half of those were farm-raised.

“This is a growing industry in this area,” Vilnit says, “but Maryland is really behind the rest of the coast in terms of oyster aquaculture.”

If Petty and others have their way, though, it’ll soon catch up. Grabbing onto a post and reaching down from his dock, the oysterman fishes one of his stock from a cage. The oblong shell fills his hand, bowl-shaped on one side, gently lipped on the other, with smooth edges and a polish over the craggy surface. It’s a creature raised as much for its presentation as for the meat inside.