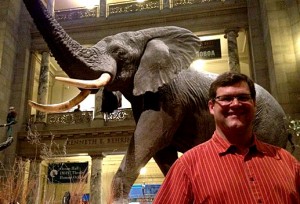 When Kirk Johnson first showed up for work at the Smithsonian, he must have felt a little like Ben Stiller’s character in the Night at the Museum movie sequel.

[TRAILER CLIP: “This is the Smithsonian. This is the big leagues.”] [KIRK JOHNSON: “It was a sense of awe when I walked across the mall and sort of stopped in the middle of the mall, took a moment  and looked up at the building. I’m a museum guy and to be the director of the biggest natural history museum in the world is beyond childhood dream stuff.”]

Johnson’s arrival at the Smithsonian was the same day as Hurricane Sandy’s arrival. The museum was closed, and the staff was gearing up for what might have been a direct hit before Sandy took a turn to the north.

This is a museum that houses the Hope Diamond. It houses prehistoric fossils and animal exhibits from antelopes to zebras. And that’s just what visitors see. Behind the scenes is an army of researchers poring over scientific finds and still making new discoveries. It’s also home to some little-known treasures, like this one, tucked away on a metal shelf in a back room off limits to museum-goers. It’s the first skull ever discovered of the three-horned dinosaur triceratops.

[“This one in particular right here was found in Lakewood Gulch, about a mile west of Mile High Stadium in downtown Denver in 1887. And when they found it they didn’t know about triceratops. So they named it Bison alticornus. They thought it was a fossil bison.”]

The skull isn’t just historic. It was found in a gully just a mile from Johnson’s former home in Denver, when he was director of the Denver Museum of Nature and Science.

[“That’s the gully where they’re putting the light rail through right now. So as they were doing the excavation of the light rail I kept going out there looking for the rest of the 1887 dinosaur. I never found it.”]

Johnson goes to work with a lot of former Coloradans these days. Most of them, like this one, are millions of years old.

[“So it’s kind of funny coming out here because, coming from the West, many of the fossils on display are from places I used to live. It’s like a little homecoming.”]

Last month, Johnson became director of the National Museum of Natural History, the biggest museum of its kind in the world, and one of the most visited. But like its specimens, the museum is aging. Its Dinosaur Hall hasn’t changed much since the Seventies. Neither have dinosaurs. But museum visitors have, and Johnson wants to make it come alive for a new generation of museum-goers.

Well, maybe not come alive like it did in the movie. For some visitors, the dinosaur models here are already too real.

[Reporter: What did you think of this guy?

That’s four-year-old Effie Andam, who was visiting from California. Her aunt Dzifa Andam lives in the DC area. She says when visitors come with small children, stopping at this museum is a must.

But Johnson says visitors don’t see museums the way they used to.

[“Now you walk around this museum, you see lots of people observing the museum through the lens of their iPhone. I don’t know if that’s good or bad, it’s just a different trend. And as people have different means of communicating, we have social media and that sort of thing, we have to learn to keep up with the communication methods that our visitors are employing. If we can’t communicate with them they we’ve lost the ability to make an impact on them.”]

So museums have to change, too, Johnson says. That could mean more technology. Maybe more interactivity. But Johnson says he hopes it will also mean letting visitors see more of what goes on behind closed doors at the Smithsonian.

[“People are always surprised that there’s a big operation behind the scenes. They see the exhibits and think that’s all there is. But we have this huge collection, 127 million objects. And a huge scientific staff doing scientific research.”]

Johnson came to the Smithsonian after almost 22 years at the Denver museum. He ended there on a high note. He led the excavation that uncovered thousands of prehistoric bones at Ziegler Reservoir in Snowmass Village, where they were first discovered by an earthmoving crew. It turned into one of the biggest fossil discoveries in the country ever. 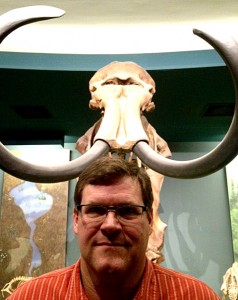 Walking among the mammoths and mastodons at the Smithsonian is a little reminiscent of the Snowmass dig.

[“It’s fun to look at these mammoths skeletons now because we spent those amazing 70 days collecting 6,000 bones. Now when I look at a skeleton I recognize every single bone, the toe bone, the ankle bone, the fibula …”]

[“Last week researchers in Denver were looking at bones and discovered bones from a mountain goat and a black bear.”]

That’s the first carnivore discovered at the Snowmass site. It wasn’t the sexy saber-tooth tiger they were expecting, but Johnson says new discoveries will keep popping up as the researchers pick over the bones they collected.

Johnson is still involved with the Snowmass project. But his new job keeps him in the office a bit more. Still, it’s a pretty cool office.

[“Every day I get to go on this incredible treasure hunt in the world’s largest science smorgasbord. And it’s just awesome, I can’t even tell you.”]

Just like in the movie, this is the Smithsonian. This is the big leagues.