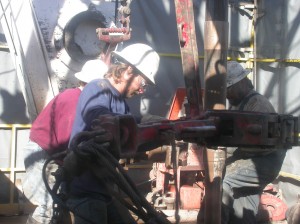 Almost 4,000 feet below Hunter Mesa, the earth was churning. A volleyball-sized drill bit studded with diamonds and knobs of tungsten carbide tore through sandstone and shale, steadily working its way to the natural gas below.

From the drilling platform at the foot of a 40-foot derrick, the noise was deafening: the sound of a nation’s energy appetite on the hunt.

Using a four-foot-long pair of metal tongs, roughnecks unhooked the drilling apparatus and added another length of steel pipe.

” They drilled as far as they could,” said Richard Eberspecher, drilling superintendent for the Canadian gas company EnCana, which is leading the charge in gas production among the meadows south of Silt. “Now they have to put another one on.”

It’s called a connection, and it marks the progress toward reaching the gas field beneath the Piceance Basin in 31-foot increments.

Looking at the wells from their homes, many nearby residents see the coming of the energy industry as a blight on the landscape. Looking down from a gas rig, drill crews see the future.

“There isn’t an overabundance of plentiful, easily-accessible natural gas in the United States and they need to drill it. You know?” Eberspecher said. “The more self-sufficient we are, the better off we are, don’t you think?” 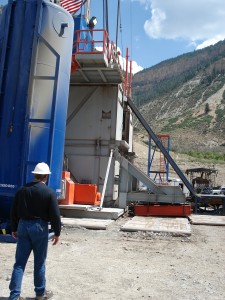 A worker on an Encana rig near Parachute, Colorado. David Frey photo.

“There’s an enormous steamroller poised to come into Garfield County,” said Randy Udall, director of the nonprofit energy organization Center On Resource Efficiency, or CORE, based in Aspen and Carbondale.

Natural gas may be the county’s economic driver for the next 30 or 40 years, Udall said. That could mean big economic impacts, but also major environmental and social impacts, dwarfing the oil shale boom that boosted western Colorado in the early 1980s, then crushed it when it went bust.

“Garfield County has historically been kind of the poor cousin to the richer mountain communities that have been based on tourism. But in the decades to come, I think gas development in Garfield County is going to eclipse the economic punch of the higher mountain towns like Aspen and Vail and Summit County.”

County officials say they’ve already seen the impacts. While other resort communities have suffered in the economic downturn, they say Garfield has weathered it better.

“The gas industry has got to be one of the most positive and bullish parts of the Garfield County economy over the coming decades,” Udall said.

EnCana has just eight staffers at its Rifle headquarters, but last year tallied some 526 contractors, most staying a few weeks or months before moving on. Williams Production has over 50 employees and more than 400 contractors.

Those numbers are likely to grow over the coming years, and shift toward more fulltime employees. That could also mean a shift toward more local workers. Colorado Mountain College started offering classes in gas technologies to train a local workforce. And it could mean more itinerant workers settling here for ongoing jobs.

“Five years from now, I would say we’re going to more than double the number of people,” said Steve Soychak, Williams’ district manager at Parachute. “Ten years from now, it’s hard for me to say. Maybe double more, I don’t know. It could be big.”

For those wary that any energy boom may be followed by a bust, this one could have some advantages. Because so many workers are from out-of-state, a bust wouldn’t mean the huge loss of local jobs that followed the oil shale bust. And because the wells will pump for decades after the drilling stops, tax revenues should keep flowing. 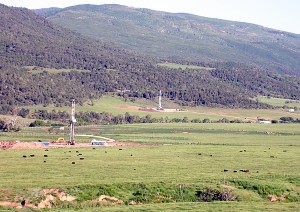 Decades of dependency
It’s a mixed blessing, Udall said, that could bring wealth at the cost of Garfield County’s character.

Industry representatives say it won’t be that severe.

“One thing people tend to overlook is that residential growth is much more disruptive to wildlife habitat than oil and gas drilling in terms of homes, rooftops, roads, dogs, cats and all of the traffic that’s involved in that,” said Ken Wonstolen, senior vice president and general counsel for the Colorado Oil & Gas Association.

Many observers agree the search for natural gas in the Rockies will likely play out over decades and become more and more critical. Natural gas demand is growing, fueled, ironically, by environmental concerns that saw coal-fired power plants replaced with gas-fired generators.

The U.S. Energy Information Administration predicts gas-powered energy plants will double their use by 2025, accounting for a third of the gas that’s used. Meanwhile, as traditional domestic supplies trail off, gas pumped from the Rockies is predicted to see the biggest boost. Imports from Canada and elsewhere are also expected to gain. (Already, the U.S. consumes half of the gas produced in Canada.) Shipping it from elsewhere is costly and hazardous – it must be cooled to 260 degrees below zero before it can be safely transported.

As demand increases, prices will likely go up, too, making the gas in the West that much more valuable.

“I think sometimes we see kind of a false dichotomy set up, sometimes by the media and by opponents of oil and gas, who say it’s industry profits versus the environment,” said COGA’s Wonstolen.

“The reason there are profits to be made is that there’s a demand for that energy from the citizens of the United States. So it really is, are we going to have the energy for our lifestyle and our economy and the health of our nation or not? If we’re not going to do it here in the States, we’re going to develop it other places where it may or may not be secure. We’re going to bring it across the ocean with the attendant potential disasters that we know could happen there. These are just the choices that have to be made and they ought to be made in an informed way.”

Alternative fuels could lessen our dependency, but even those who eye hydrogen fuel cells as an upcoming power supply expect to initially use natural gas as the source of hydrogen.

“We don’t know what the answers will be, he said, “but we have decades ahead of us where natural gas will be of increasing importance, both here and internationally, as the preferred energy source, because of its clean-burning qualities.”
Seven generations

That worries some observers, who fear the nation’s appetite could outpace production, and threaten sensitive areas.

“In the long run, the nation faces a really chronic gas crisis,” Udall said. “During our history, we’ve used more gas than all the rest of the world’s citizens combined. According to some experts, half of all the gas that will ever be produced in North America has already been burned. It’s not that we’re running out of gas, but that gas is getting more difficult to find.”

The cost could be highest on public lands. Environmentalists criticize the Bush administration for pushing to open these areas to drilling without proper environmental protections. That concerns Mike Dombeck, who served as BLM and Forest Service chief in the Clinton administration.

“We’re looking at the need to road unroaded areas, the need to risk water quality, the need to degrade fish and wildlife habitat, recreation opportunities for the future,” Dombeck said. “We’ve gotta face it. The easy stuff is gone. As we’re assessing whether or not we need to get into these areas, we need to take a long-term look and ask ourselves the question, based on the Native American saying, we should be making decisions for seven generations. I don’t think the oil and gas development that we see on the remaining public land passes that test. Only in very rare cases, perhaps.”

For Udall, that means a need for a greater more renewable resources, like wind and solar power. It also means better efficiency in things like furnaces, insulation and air conditioning. Even many industry representatives say conservation will have to play a bigger role in our energy policy. Most home furnaces waste about half the gas they use, Udall said. The Air Condition Contractors of America estimate up to 30 percent of energy used for cooling is lost through poor design and insulation. And heated driveways?

“Is this the best use of a very valuable resource?” Udall asked. “Some people would say no.” 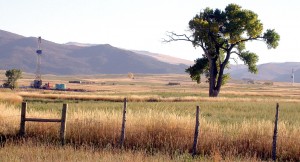 Since gas will likely be a big player in Garfield County for decades to come, Udall said, there’s time for caution, and a need for stiffer regulations to protect homes and the environment, while still reaching the gas.

“The gas industry is like a big dragon, and in my view, we’ve got to bridle this dragon. We’ve got to hobble it and we’ve got to do gas development right. … I think local government and local citizens need to organize to minimize the negative impacts and maximize the positive impacts of gas drilling in Garfield County.”

Industry representatives say they’ve come a long way in using measures that better protect the environment in what is by its nature a destructive activity.

“We’re doing as good as we can and still harvesting the gas,” said Encana’s Eberspecher.

But critics complain the federal government is lessening regulations to make drilling easier, state regulators put a higher priority on profits than protection and local governments have little control.

Steve Smith, a coordinator with Western Colorado Congress working with local landowners to address drilling in their backyard, said Americans should learn from past blitzes for timber and coal that left the landscape scarred.

“Yeah, this may be the current pocket of gas, ‘and the nation needs gas,’ but we’re not going to do it the way we did the timber and coal in Tennessee and Kentucky,” he said. “We’re going do it selectively. We’re going extract it in a way that still respects people’s lives and preserves the natural environment and keeps intact the scenic beauty that is the reason we’re all here anyway.”

That’s the hope of many landowners who have found themselves neighbors to gas wells. Eleven miles south of Silt, homeowner Peggy Utesch drove past hay fields she feared will soon be gas fields. She’s fought the industry, she said, because she’s afraid without taking a stand, landowners will get run over.

Motoring along dirt roads that cut through green pastures dotted with derricks, she stopped at an old schoolhouse and church. Across the road, an orange streamer fluttered from a stake alongside a barbed-wire fence.

Utesch said she cringes when a new orange flag appears; they mark spots for new wells, like this one, in a horse pasture.

“You look at the size of the destruction and you can just imagine this whole area, this bucolic green ranchland out here, just dotted with these (wells),” she said.

A few months later, a drilling rig rose from the horse pasture, and the roads winding south of Silt were dotted with more orange flags.