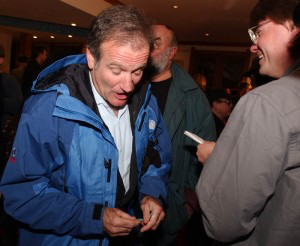 I have been starstruck as a journalist only once.

Working as a reporter in Aspen gives even rookies a chance to brush up against A-listers they probably wouldn’t run into as cub reporters in Poughkeepsie. I interviewed politicians I admired (and those I didn’t), writers whose work inspired—and inspires me—and a handful of celebrities, I guess, but not as many as you might think.

The only time I felt like a silly teenager in the presence of the person on the other end of my notebook was the time I interviewed Robin Williams. The only photo I have of myself with a source is one from that moment.

To call it an “interview” is a stretch. Williams was in Aspen for the HBO Comedy Arts Festival in Aspen, where he was with Danny DeVito debuting their new film “Death to Smoochy.” Remember Death to Smoochy?” No, nobody else does either.

The Wheeler Opera House stretched a red carpet across the reception area, and as the stars walked past, reporters linee up on the other side of the velvet rope to ask them 30 seconds’ worth of mostly dumb questions.

I was planning to do a story for the Denver Post about independent filmmakers, not big stars, and Robin Williams wasn’t the best person to ask about that, but then, there I was, and there Robin Williams was, and although I was never much into celebrities or red carpets, heck, I might as well jump in.

And Robin Williams jumped out. As DeVito walked past, Williams ran manically into the line of reporters and started peppering him with questions. DeVito played along. It was a game to Williams, as life must have been, in turns.

Everything is so serious, and nothing is.

I grew up watching “Mork & Mindy,” the TV show in which Williams shaped what would be a lifelong persona of an outsider looking in, trying to make sense of—and make fun of—a beguiling world around him.

Williams called it “craft,” not “art,” and while we might want to call him an artist, there’s something particularly respectful about being a craftsman. Craftsmen shape the everyday into moments of artfulness. That was Williams.

From the attic in Mindy’s Boulder apartment to the confines of Alladin’s lamp, Williams’ work inspired us to look at the world differently and with sympathy. Things are as they are, but not how they must be. Warzone radiowaves are too big for crewcuts and classic hits. Poetry is too powerful to be confined to poetry books. Genies must be free.

Red carpets are too constricting. Velvet ropes can be crossed.

My 30-second interview with him was a special moment for me, but not for the annals of journalism. I was right. Robin Williams didn’t have much to say about indepedent filmmakers. I got about one decent quote from him on the subject.

His best quote was the one I ended the story with, about the enduring role comedy has played in films. I’ll let you read it if you get that far.

What is true about films is also true about the world. We turn to comics, like kings once  looked to courtroom jesters, to tell us the saddest things about the world with a smile. Robin Williams held up a mirror to the world and shattered it. He jumped the velvet ropes. He broke the boundaries. He made us laugh until we cried.

On Screen and Off, Celebrities Take Shots at Hollywood

ASPEN – What’s a squeaky-clean pink rhino to do?

Dogged by slimy executives, a sleazy agent and underworld thugs, not to mention a homicidal TV host bent on vengeance, all Edward Norton wants is to give kids a clean-cut TV show with a good message and no product placement. All Robin Williams wants is to see the pink rhino dead.

That’s the premise of “Death to Smoochy,” a dark comedy directed by Danny DeVito, with Norton playing the lovable Smoochy and Williams playing Rainbow Randolph, Smoochy’s tap-dancing predecessor ousted from the stage by scandal.

Crowds at the U.S. Comedy Arts Festival shared a special screening with the cast Thursday at Aspen’s 113-year-old Wheeler Opera House. It was a distinctly un-Hollywood theme for this Hollywood crowd, but then, it’s also a crowd not afraid to take chances.

At the same festival, comedians Saturday night were slated to honor controversial jokesters such as sharp-tongued comic George Carlin, TV host Bill Maher, the Smothers Brothers and activist Dick Gregory for standing up for the First Amendment.

Also on Saturday night’s schedule was a tribute to comedian/actress Whoopi Goldberg and a late-night program titled “Regarding 9/11,” with cómics taking a look at their own reactions to the Sept. 11 terrorist attacks.

With themes such as these, taking on Hollywood is no big deal.

“I’ll sue you, you’ll sue me,” Williams sang at the “Smoochy” preview to the tune of the theme from the popular “Barney” children’s show that “Smoochy” mocks.

Even offstage, the comics couldn’t resist taking some potshots at the studio. As DeVito walked the red carpet flanked by photographers, Williams jumped among the reporters and peppered him with questions about Smoochy cereal and Smoochy cookies.

The “Smoochy” movie headlined the festival’s Film Discovery Program, a 3-year-old program designed to help struggling independent filmmakers connect with executives and wedge a foot in the studio door.

“It’s in our best interest to celebrate comedy and film in whatever size, shape and form,” said Kevin Haasarud, the film program’s director.

While the celebrities attract flashbulbs at big screenings such as “Smoochy,” independent films and shorts vie for attention. Last year, Haasarud said, about 30 percent of the independent feature filmmakers scored deals through the festival. Producers of short films did even better.

Actor Jeff Daniels has an independent film here and gets to walk in the limelight.

“I got tired of the same stuff I was being offered,” said Daniels, who wrote, directed and stars in “Super Sucker,” the film he’s presenting at the festival.

Another, “Human Nature,” features Tim Robbins and Patricia Arquette in screenwriter Charlie Kaufman’s follow-up to “Being John Malkovich. And in the 4-minute short “The Comeback,” Samuel L. Jackson stars as a man making a dramatic comeback to peewee football.

But most independent films here have names their directors only hope you’ll know someday, along with quirky subjects, such as a microbe’s journey through space and a restaurant love affair between a trout and a salad.

For Williams, low-budget, independent films can help keep comedy edgy. “I think they’re out there trying everything they can,” he said.

And after all, he said, old-time comedians such as Buster Keaton are part of the reason people go to movies today. “That’s what started films,” Williams said. “People forget. It’s comedy.”