In his cowboy hat and blue jeans rolled over muddy boots, Tai Jacober seems more Marlboro Man than green crusader, but he’s a little of both. Riding on horseback down Thompson Creek Road above Carbondale, steering a herd of 800 bobbing sheep with whistles, shouts and a border collie named Violet, Jacober appears like a vision of the Roaring Fork Valley’s past, when sheep here numbered in the tens of thousands.

He’s hoping it’s a vision of the future, though. Jacober doesn’t just drive sheep and cattle. He’s also trying to drive agriculture in a new direction, or maybe an old direction with a new twist. With brothers Rio and Forest and father Jock, he runs Crystal River Meats, supplying grass-fed beef and lamb, raised without hormones or antibiotics, to local restaurants, supermarkets and shoppers.

“The main focus is to create a healthy protein that’s raised locally and sold locally,” says Jacober. “Doing it locally is environmentally the right way to do it and it makes sense. I think there’s no question it’s better for the world.”

The model might not work everywhere, Jacober admits, but it’s custom-made for the Roaring Fork Valley, where plenty of consumers, schooled on books like The Omnivore’s Dilemma, are willing to pay premium prices for grass-fed meat raised close to home. Here, too, are landowners with historic ranches who have no desire to do the ranching themselves. That’s OK with Jacober. He’s a rancher with no land.

With his father Jock at right, Tai Jacober cares for an injured lamb. David Frey photo.

“Tai calls himself a pickup rancher. He lives in his truck,” says his wife Molly. Relying on historic ranches, like the Coldwater Ranch above the Crystal River, and on demonstration farms like Sustainable Settings and Rock Bottom Ranch, the Jacobers knit together enough acreage to graze about 750 cows and some 1,000 lambs, numbers that are growing every year.

“This is a nice way to be a poor-man rancher,” Jacober says. The brothers still lean on their other business, Jacober Brothers Construction, and on their wives’ income, to keep the ranch business afloat. But business is soaring. What began nine years ago with just five cows butchered and sold to friends has grown steadily ever since. Last year, the Jacobers sold 170 cows. This year, they’re poised to sell 450, and with new contracts with Whole Foods, they’re set to keep growing.

Crystal River Meats already sells to City Market in Aspen and El Jebel. Soon, its meat will appear in forthcoming Whole Foods stores in Basalt and Frisco. At Easter, Whole Foods plans to sell these lambs jogging down the road throughout its Colorado stores. That’s farther afield than Jacober likes to go. (He’s so insistent on selling local, his company refuses to ship gift boxes. People should eat where they live, he says, even if it costs him sales.)

“He carries the burden of the whole earth on his shoulders,” Molly laughs. 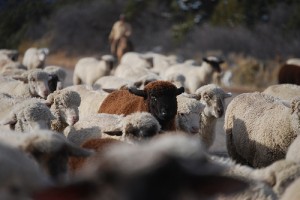 In discussing his operation, Jacober ranges from the merits of grass-fed beef to the benefits of buying local; from preserving open space to feeding 7 billion people around the globe, and it all fits into his vision for Crystal River Meats. The sons of old hippies, the Jacober brothers were raised with an environmental ethic on a ranch in southern Colorado before coming to Carbondale by way of St. Louis. The boys went to prep school at Colorado Rocky Mountain School, often riding their horses to class.

After studying agriculture at Montana State, Tai Jacober returned to the valley and joined his brothers in the construction business. That taught him business strategies most ranchers never learn, he says, and while many ranchers are happier mending fences than conducting market analyses,

Jacober spied a niche in the valley for local grass-fed beef and lamb.

“Your average food travels 1,400 miles,” Jock Jacober says, as he leads to sheep by horseback to a lower pasture where they will fatten up for the Whole Foods refrigerator case. “I find that unnecessary. By changing our diet appropriately and by nurturing the land around us, growing food on it, we can significantly improve the carbon footprint of what we eat.” 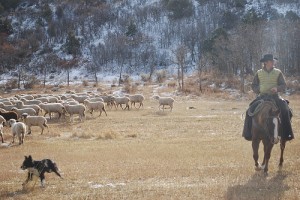 Crystal River Meats sells to consumers at farmer’s markets and out of their Fourth Street store in Carbondale, a historic building that was a general store (and brothel) some 80 years ago. Mostly, though, they sell to restaurants from Aspen to Glenwood Springs.

“The beef is amazing, but for us it’s all about community support,” says Mike Mercatoris, a founding partner in ZG Hospitality, which serves Crystal River Meats at its Zheng Asian Bistro in Glenwood Springs and its new gourmet burger joint, GRIND Glenwood. “When you can look the rancher in the eye, he’s in the restaurant with dirt on his boots, you realize this is what you’re affecting.”

Buyers are also affecting something else. They’re preserving a ranching tradition fast disappearing from the valley, but one that began long before grass-fed beef was a buzzword; it was just the way it was done. “On a daily basis,” Molly says, “there have to be people who want to eat what we’re providing.”