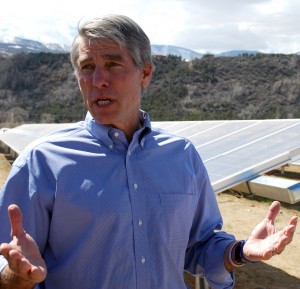 Thursday may have been Barack Obama’s turn to light up the Democratic National Convention, but it was Colorado’s day in the sun.

“It’s fitting to have the eyes of the nation on Colorado,” said Rep. Mark Udall, whose father Mo made an unsuccessful presidential bid and addressed the Democratic National Convention 32 years earlier. “It’s fitting that the change we need in Washington starts here in the Rocky Mountain West. It was hope that first carried early Americans here, not know what lay ahead but knowing they must go forward, just as we must go forward. And like those early Americans, we believe this is a land of fresh starts and boundless optimism. We look to our mountains and prairies, our wide-open skies, and we see the limitless possibility that is America.”

Udall, who hails from a family of Western politicians, is engaged in a tough senate battle. His cousin Tom, a New Mexico congressman, spoke on Wednesday. Udall quoted from his father as he addressed the crowd at Invesco Field at Mile High.

“‘Every generation has had to change this country to make it work, and we Democrats have always led that change,’” Udall said. “Those words are just as true today. My dad would be so proud to see a new generation gathered here in Colorado – the heart of the West – ready to lead that change.”

Udall also summoned the words of revered Western writer Wallace Stegner, and called for “leaders to match these mountains.”

In recognition of the convention’s home state, a string of Colorado Democratic politicians took the podium.

“This year the road to the White House cuts straight through the heart of the American West,” said a hoarse Gov. Bill Ritter.

It’s not just home state pride. Throughout the convention, Democratic leaders underscored Western battleground states long in Republican hands that could tip the balance in this election.

Ritter underscored Western and Plains states recently led by Democratic governors that were previously in GOP hands – Colorado, New Mexico, Arizona, Kansas and Oklahoma. Denver Councilwoman Elbra Wedgeworth, president of the host committee that fought to bring the convention to Denver, rattled off Western states that could prove to be battlegrounds.

“We call this the New West,” Wedgeworth said.

Wedgeworth and Ritter, followed by Reps. Ed Perlmutter, John Salazar and Diana DeGette, took the stage Thursday afternoon before Democratic Party Chairman Howard Dean. Dean touted his “50-state strategy,” a move that may have done as much as anything to invigorate flagging Democratic organizations in the West and other areas.

Challenging the conventional wisdom of focusing on big states with lots of electoral votes, Dean urged Democrats to target even less populous states. As discontent with Republicans and the Bush administration grew, GOP strongholds, including many areas in the West, turned Democratic for the first time in years. Dean credited organizers with reinvigorating what had been a struggling party.

“We knew if we knocked on doors, people would respect us and they would vote for us and they did,” Dean said. “Because you did these things, we today are competitive in all 50 states.”

“We need a president who understands the values of rural America,” said an unusually animated Salazar. His brother, Sen. Ken Salazar, D-Colo., spoke the previous day.

Like Udall, Ritter tapped into the symbolism of the West as a place of hope to mirror Obama’s message.

“The wide-open West isn’t just about wide open spaces,” Ritter said. “It’s about the possibilities of American opportunity. It’s about a set of American ideas that offer hope and unity and the promise of change. It’s about binding people together with common goals, shared visions and the pioneering spirit that defines all of America.”