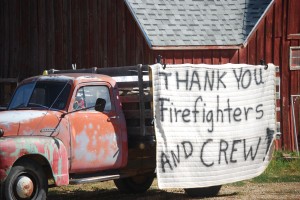 When firefighters arrived, eight minutes later, the fire was raging.

“I have a fully-involved fire,” a firefighter reported. “I have trees torching. It’s right at the base of Emerson Gulch. Get Gold Hill Fire out NOW!”

The Fourmile Fire had begun a Labor Day charge that would soon make it the most destructive fire in Colorado history, destroying 166 homes, scorching nearly 6,500 acres and forcing thousands of Boulder residents to flee their homes.

No lives were lost, but the fire became the nation’s top priority as more than 200 firefighters from across the country arrived to battle it. Officials believe it was caused by humans, but the exact cause remains under investigation.

The blaze became just the latest reminder of the fire dangers that come with living in places where civilization meets the wild.

“When you live in a house in the woods on the side of a hill, you know you’re taking a chance,” said Wischmeyer, a former New Yorker whose own home was just miles from the blaze. “It’s part of the reason I joined the fire department when I moved here.”

The Fourmile Fire flared through a clutch of subdivisions that wind amid tall timber in the foothills northwest of Boulder. Homes range from 1870s miner’s cabins still in use to multimillion-dollar mansions. Residents arrive seeking a private paradise where they might paint, enjoy their retirement or raise horses or llamas.

Sheriff Joe Pelle was mowing his lawn on Labor Day morning when his pager went off.

“I looked up from my lawnmower and saw a cloud of smoke,” he said.

Within an hour, Pelle said, the small wildfire had “exploded” into a massive one.

“We’re used to wind-driven fire events,” he said. “Every time we get these low-humidity, high-wind conditions, the hair stands up on the back of my neck.”

April Story had been captivated by the light that morning. The raging winds – the highest she had seen all summer – had cleared out the humidity and left clear blue skies.

She left her horse barn, where she had spent the morning with her horses, and went out to take pictures – the barn, the flowers around her house in Sunshine Canyon.

“All of a sudden, dark plumes started coming over from the west,” she said. “The sun was just this orange ball and this dark cloud – the light was really incredible.”

As the sky darkened, Story realized she might be in danger. Then crews shut off the electricity. A text message appeared on her phone from her neighbor, who was out of the house, warning her of the fire.

“Can you go to my house and get my computer?” the message said.

Story did, as phone messages rolled in from the sheriff’s office, warning of a spreading fire.

Story put her dog and two cats into her car, along with her and her neighbor’s computers. That was all she had gotten out of the house when the firefighters showed up on her driveway.

“You gotta go now!” they shouted. “You don’t have time to get anything! Get out now!”

Story pleaded for time to save her horses.

“Can’t you cut them loose?” the firefighter asked.

Thia Martin, an artist, was painting in her studio when she saw the cloud billowing.

“I think it’s going to storm,” she told the man who had come to walk her dog while she painted.

Martin managed to pack up her pets, video equipment, journals and boxes of family photos and documents before firefighters told her to leave. Martin was preparing to make a funeral video for her father, a former FBI agent now close to death. She had old pictures and correspondences from J. Edgar Hoover. They made it into the car. A lifetime of photos and artwork didn’t.

“That was my whole life right there,” she said.

As the fire approached, ash and baseball-size cinders rained over the houses in its path. Story tried to steady her horses – two paints she bought from the Sioux Reservation. She saddled up one, held the other by the reins and rode away while a friend tried to shuttle her car and another simultaneously, driving one, then the other.

“I didn’t want to look back,” Story said, worried the horses would pick up on her fear.

Behind her came emergency crews. Behind them, she later learned, were 200-foot flames chasing them down the mountain.

Ashley Woods had tears in her eyes when she met up with her girlfriend Lisa Polansky that afternoon at an evacuation center set up at the Boulder Recreation Center.

Woods, a rock climbing instructor, had been climbing that morning when she saw smoke near their house. When she tried to return home, deputies turned her away at a roadblock. Polansky, an attorney who was home at the time, had gathered their two dogs and two cats, some photographs and important documents and left the house.

“What do you want me to grab?” she texted Woods.
“I just want you and the animals to be OK,” Woods replied.

They tried to spend the night in their Volkswagen camper van, but thick smoke pouring in from the fire made it hard to breathe.

At 2:30 a.m., they arrived at a Holiday Inn Express. The parking lot was full.

“I gotta tell you. I thought there was no way,” Polansky said.

But one suite remained. The owner had saved it in case he had to evacuate his home.

The hotel had filled with evacuees with their dogs and cats, one of many hotels across town filled to capacity.

“It was a bad Monday night,” said General Manager Christy Pettit. “You could see flames on top of the ridge. The next day we were covered with ash.”

On Tuesday morning, Wischmeyer, the firefighter, saw the damage the Fourmile Fire had done overnight. Dispatched with the Lefthand Fire & Rescue crew, he went house to house trying to protect the ones left standing.

Some houses remained. Some were burned to the ground. A child’s toy angel left in the rubble, one wing burned off, brought tears to his eyes.

“It was random, based on the whims of nature,” Wischmeyer said.

The danger was far from over. On the surrounding slopes, Wischmeyer could see vegetation dried by the fire but left unburned, ready to go up with just a spark. A burning log rolled down from above, as if from nowhere.

Wischmeyer set about clearing the duff from the sides of houses, cutting off branches, clawing an 18-inch line to try to protect the homes.

“Sometimes it seems to me a joke,” he said.

Other firefighters set about trying to keep the fire from spreading outward, but they were fighting against tough conditions. Over the next three days, winds gusted over 60 mph, drying out the air even as occasional light rains fell, raising fears that the fire might race again.

Reid was taken off the fire lines after she scratched her cornea clearing away brush. Looking at the fire scene from afar, she worried about the fire rushing again.

Firefighters worked in a landscape of blackened trees and ash-covered ground. Winds whipped up dust devils. Among the local crews, many had friends who lost homes. Some lost homes themselves.

Meanwhile, evacuees scrambled for information. Complaining about a lack of news from officials, they became detectives, trying to find out if their houses were still standing.

Ashley Woods and Lisa Polansky turned to satellite images on Weather Underground to make sure their home was safe and to check on the homes of other evacuees.

“I felt like I delivered horrible news,” Woods said, “but they weren’t getting information from official sources.”

Thia Martin got word on Tuesday that her house had been destroyed, along with those of her neighbors.

“Everything was gone,” she said. “Twenty-five years of work. I was very unprepared. It was a huge loss for me. All my children’s history. All my parent’s history.”

Her landscaper couldn’t believe it. Martin had spent tens of thousands of dollars on careful landscaping to protect the house from wildfire. So he scaled nearby Flagstaff Mountain and looked out with binoculars.

Her house was still standing. The previous news was wrong.

“I was elated,” Martin said. “I was flipping out.”

When newspapers printed the addresses of houses that were lost to flames on Wednesday, April Story’s was at the top of the list. The home where she had spent the last 25 years was gone.

“I had treasures from all over the world,” Story said. “I had a huge art collection. My entire business was in the house.”

An artist who works with wildflowers, Story said she lost collections of wildflowers gathered over 35 years.

“I had a whole closet full of tens of thousands of hours of picking, preserving and collecting,” she said. “Everything’s gone.”

Community members reached out to fire victims. Businesses offered everything from free meals to free alternative health treatments. At the Holiday Inn Express, the hotel staff gave evacuees rooms at nearly half-price, waived the pet fees and served them free dinners every night while Boulderites brought in homemade muffins and fresh fruit.

Each day, the fire weakened. On Thursday, some residents were given a few hours to check on their homes before being sent away again. Crews felt like they reached a turning point.

“Right now we’re hitting everything we can find that’s a potential threat to either our line or a structure,” said Incident Commander Jim Thomas, who arrived from Wisconsin to lead the firefighting effort.

Gov. Bill Ritter, who had allocated $5 million to the firefighting effort, paid his second visit to the operation.

“It’s a difficult time,” he said. “It’s a great tragedy. But we in government believe that this is our greatest responsibility.”

Allowed to return to their homes, Woods and Polansky opted to wait one more day, to give time for the power to be restored and for the danger of a blow-up to recede.

Those in the burn area were still barred from returning. Some, like Story, had no home to return to.

Losing her home brought tears to her eyes, but for those who choose to live in the mountains, she said, this possibility was always part of the bargain.

“Fire is a part of nature,” she said. “We all know that. Everyone who lives in nature knows that and we choose to live there.”

Story said she plans to build again, and watch the wildflowers come back from the burned soil.

“It’s going to become just another memory,” she said, “just like all the other memories I have in 25 years at the place.”