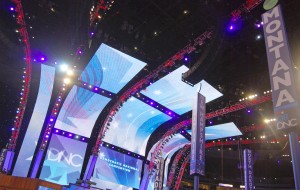 The Democratic National Convention is in the West, and to at least some degree, the West is in the convention.

As Denver Mayor John Hickenlooper greeted the delegates, he made much of the West and the lessons it offers Democrats – and not necessarily the ones you’d expect.

“Remember,” Hickenlooper said. “There were a lot more barn-raisings than there were shootouts in the Old West.”

It was the success of Western Democrats in the last elections that led to the choice of Denver to host the Democratic National Convention. Democrats swept major seats in Colorado, and they gained major ground in elections across the West.

That has prompted party strategists to look at Western Democrats, those straight-talkin’, cowboy hat-wearin’, big boot-stompin’ moderates as a blueprint for success in traditionally red states. Longtime Republican strongholds like Colorado, Nevada and New Mexico are especially in play this election, even though Democrat Barack Obama is likely to face off against a Westerner, John McCain, of Arizona.

“I think the Rocky Mountain West is the future of the Democratic Party,” says Julian Langness, 22, a delegate from Bonners Ferry, Idaho.

As the convention got under way, a video played to delegates, highlighting some of the West’s Democratic success stories, many of them posing on ranches, by alpine streams or with a Rocky Mountain backdrop. Wyoming Gov. Dave Freudenthal. Montana Gov. Brian Schweitzer and Sen. Max Baucus. Nevada Sen. Harry Reid. Arizona Gov. Janet Napolitano. Colorado Gov. Bill Ritter and Sen. Ken Salazar.

Hickenlooper tapped into some of the usual Western stereotypes, but he also looked to different lessons from the West.  He quoted raft guide wisdom from Rocky Mountain whitewater: “When the water is rough, everybody paddles.” Denver’s mile-high altitude, he said, gave it a good perspective to “take the long view.”

And like Obama’s core message, Hickenlooper suggested, the West has always been about change.

Hickenlooper offered himself as an example. He began his career as a geologist for Denver’s booming oil business before the oil business went bust and he was out of work. He reinvented himself as a successful businessman in a region that has prided itself on reinventing itself. He pointed a few blocks from the convention in Denver’s stylish Lower Downtown, or LoDo, neighborhood. Not long ago it was an off-limits dive. “Now it’s the envy of the country,” Hickenlooper says.

How Denver would be depicted in the convention was reportedly in dispute. Rep. Diana DeGette, D-Colo., a fourth-generation Coloradan, led a movement that pressed for a rodeo to anchor the event. Hickenlooper refused, reports the National Journal, preferring a view of collaboration in the Old West over rugged individualism. (DeGette, reportedly, is presenting every delegate with a Western shirt, designed by Brokeback Mountain outfitters Rockmount Ranch Wear, instead.)

The “collaborative spirit of the West represents the future of American politics,” Hickenlooper told the crowd.